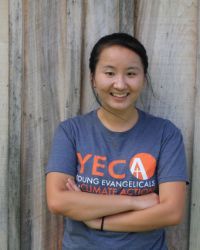 Melody Zhang is a senior at the University of Michigan studying Philosophy & Environmental Studies concentrating in Law, Policy, and Planning. She is passionate about the intersection of the environment and urban design as a radical medium for social justice — particularly in her hometown Detroit, a space that currently re-imagining its future.

Melody's love for the environment began when she took a course in AP Environmental Science her senior year of high school, where she was first exposed to issues like deforestation, loss of biodiversity, and overpopulation. Coming into university, she learned about the effects of climate change on a global scale from a public health perspective — from those suffering from alarming rates of asthma worldwide to those being pulled into food insecurity and poverty due to exacerbated weather patterns. Although these facts were shocking at first, they remained a distant theoretical in the back of her mind. Then, the Flint water crisis happened. People — predominately people of color — were drinking poisoned water containing levels of lead 5x higher than the level for national concern, in a city footsteps away. She listened to stories from her friends about how their families couldn't even take showers, or how children were being born with permanent cognitive and muscle damage. These stories began to shake her awake and helped her realize how immediate and tangible the impacts of anthropogenic climate change are — particularly to marginalized communities.

Personally, Melody is convicted to fight for urban sustainability and climate justice through Jesus' calling to love the least of these and also to 'love thy neighbor as thyself'. As Jesus draws himself nearest to the people most oppressed and ostracized in society, so she seeks to do the same by speaking and acting against injustices done towards His creation and His people.

On campus, Melody is actively involved in environmental justice dialogues, where she learns and engages in issues from air toxicity in Detroit to native land loss. She currently leads A2Share, a student group focused on strengthening the local sharing economy in an effort to reduce excessive fossil fuel consumption and encourage community-building. She has previously apprenticed at a small organic farm, worked in communications for food recovery and sustainability research, and interned for a linear park in Boston. She has also served in missional outreach and hospitality in her Asian American fellowship and in the A/PIA campus community. This year, she hopes to build a robust sustainability initiative with a carbon emissions reduction goal at her church in Ann Arbor by partnering with students and church leaders.

In her free time, Melody loves reading, picnics, biking the city, painting, strolls through gardens with flowers, and so much more.