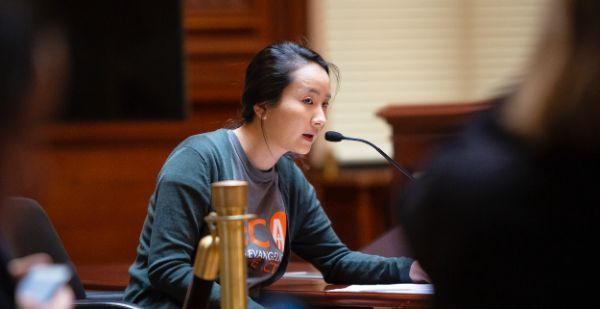 Melody Zhang, Steering Committee Co-Chair, will appear before the House Select Committee on the Climate Crisis today! This hearing is entitled "Generation Climate: Young Leaders Urge Climate Action Now" and you can learn more here. Below is her testimony!

Thank you for the opportunity to testify before you, to tell my story about how I came to care about the climate crisis as an essential part of my Christian witness.

My fascination with creation began ever since I started to speak. My very first words - which were in Chinese, my heart language - were 出去, which means, “go outside”. When I learned to read, I had stacks upon stacks of wildlife binders, scrutinizing over every new animal card I received each week. There were seasons of my life devoted to poisonous frogs, another to Michigan birds, and yet another to fish. As a child, I was rapt with wonder and curiosity - as naturally children often are - with the richness and diversity of wildlife, plants, colors, and textures that can be found in God’s creation. And when things got overwhelming, I retreated to my neighborhood parks which served as a sanctuary for me, a place I could communicate with God and be myself. I still do. The practice of the presence of God in creation opens up my imagination, my senses, and teaches me to listen. “But ask the animals, and they will teach you, or the birds in the sky, and they will tell you; or speak to the earth, and it will teach you, or let the fish in the sea inform you. Which of all these does not know that the hand of the LORD has done this? In his hand is the life of every creature and the breath of all mankind,” reads Job 12:7-10.

The Scriptures elsewhere erupt with poetic song in mention of God’s deep and abiding love and connection with every corner of creation. Psalm 19:1 says, “The heavens proclaim the glory of God, the skies display his craftsmanship”. Genesis 2:15 says that “the Lord God took the man and put him in the Garden of Eden to cultivate it and take care of it”. In the original Hebrew, these two words are avad and shamar, which mean to serve and to protect. They both appear often elsewhere in reference to God Himself watching over and protecting His people. How powerful an image this is! So to me, it is clear that God has entrusted this great gift of creation to us with the responsibility to steward it with utmost intentionality and care. The earth is the very first gift we are bestowed, and in fact our first commandment is to tend it and to take care of it.

I love people. I can see the imago dei, the image of God, uniquely reflected in each person I meet. I believe that Scripture could not be more clear about God’s command to love our neighbors as ourselves. When asked what the greatest commandment of all was, Jesus replies, “Love the Lord your God with all your heart, soul, mind, and strength.’ The second is this: ‘Love your neighbor as yourself.’ (Mark 12:30-31). I read on and see that Jesus shows us how much he really means this when he intentionally makes his home on earth among us (John 1:14), then seeks to draw nearest to the overlooked and the underheard, the outcasts in society. He lovingly lays hands on people who have been shunned; He heals them and spends precious time with them. He tells provocative parables like that of the Good Samaritan, about a traveler who gives selflessly to lift up and nurture a complete stranger of the “other” race back to life. Then, Jesus goes so far as to sacrifice himself to the point of death to “reconcile to himself all things, whether things on earth or things in heaven, by making peace through his blood, shed on the cross” (Colossians 1:15-20) so that we may have new life. I testify that I am moved and changed by the depth of His compassion towards me and all life on earth. So, I love because I am deeply compelled by this revolutionary, powerful love which He embodied and modeled for me first.

I learned for the first time that our earth was out of balance in my Environmental Science class at school. As I listened to stories about thousands of species going extinct, entire forests being cleared, and how weather patterns were being hijacked by climate change, I was shaken to my core and enraged that we could allow - and even cause - these things to happen. The earth is the one home we all have, and it is God’s very first and very wonderful gift to us. I can barely begin to imagine how much it must hurt God’s heart.

I attended university in Michigan and decided to continue exploring environmental issues. It was during this time that the Flint water crisis unfolded right next door to us. I listened in utter shock and dismay as my classmates shared about their families having no choice but to drink and bathe in water lined with lead for years until the mainstream media took it up. We organized daily water bottle drives to be sent to the people in Flint, launched campaigns to fundraise for a permanent solution to fixing the corrosive water pipes, and reported on their stories. I learned that 60% of Flint’s population was made up of people of color, and 40% were under the poverty line. I had heard about environmental issues affecting people negatively, but in this period of my life I began to understand more fully what environmental injustice looked like played out in real time. It brought urgency to what I was learning in school in a way nothing else did. I was shaken at the reality of suffering I was witnessing and my heart broke for these people, my neighbors. Didn’t Jesus call us to love them, to look after their well-being? Didn’t he say, “whatever you do for the least of these brothers and sisters of mine, you do for me” (Matthew 25:40)?

Congress, today I stand before you as Climate Justice coordinator at Sojourners and serve as Co-Chair for the Steering Committee of Young Evangelicals for Climate Action. After the Flint water crisis, I saw with new eyes that ecological issues are not one-off, siloed problems without consequence to people’s lives. As I grow deeper in my journey of loving God and neighbor as self, I continue to witness the upending of livelihoods that my brothers and sisters are already facing - both here in our very communities and all over the world - as a direct result of the climate crisis. Just last week, historic flooding after a bomb cyclone in Nebraska killed three people and ravaged entire homes. The catastrophic Cyclone Idai killed 750 people and displaced 100,000 in Mozambique, Zimbabwe, and Malawi. California wildfires last year were the deadliest, most destructive wildfires ever on record and they killed 104 people. I encounter these stories, and I cannot help but be changed. If I do nothing, I am complicit. More than this, I am disobedient. Indeed, we are seeing deadly, unprecedented extreme weather events almost on a weekly basis now, all of which are exacerbated and heightened by climate change. The impacts of the climate crisis are hitting our most vulnerable neighbors first, the very ones Jesus loved to draw close to. People of color, women, people living under the poverty line, and the young generation are already bearing the brunt of the climate crisis while doing the least to contribute to it. No wonder why young people care, especially young women of color like me. We are the first generation who will experience the most intense impacts of this humanitarian crisis, and our livelihoods are in jeopardy. Creation and people - both of which God deeply loves - are in peril and it breaks my heart. Romans 8:22-23 says, “The whole creation has been groaning as in the pains of childbirth right up to the present time. Not only so, but we ourselves, who have”.

As a Christian, I believe God calls us to a total and radical re-imagination and transformation of our relationship with others and the earth. We yearn toward a future vision of complete reconciliation for all of God’s created order. As political leaders, especially ones of faith, I implore you to respond faithfully and with full force to love God and neighbor by enacting just, compassionate and transformative climate policies which rise to the challenge of the climate crisis. And we don’t have a lot of time. That is why it takes courage, and the creativity, energy, and moral leadership of young people like us. Congress, I invite you to dream beyond this deep-rooted history of partisanship into co-creating a world of wholeness together. To my fellow believers in the room, we live in the era of the resurrected Christ. So then. Let us practice resurrection. We can begin to practice the cultivation of wholeness in our communities by addressing the climate crisis faithfully and with the full attention it demands of us. It is a tangible fulfillment of the commandment to love our neighbors as ourselves. That is my prayer for you. Thank you.