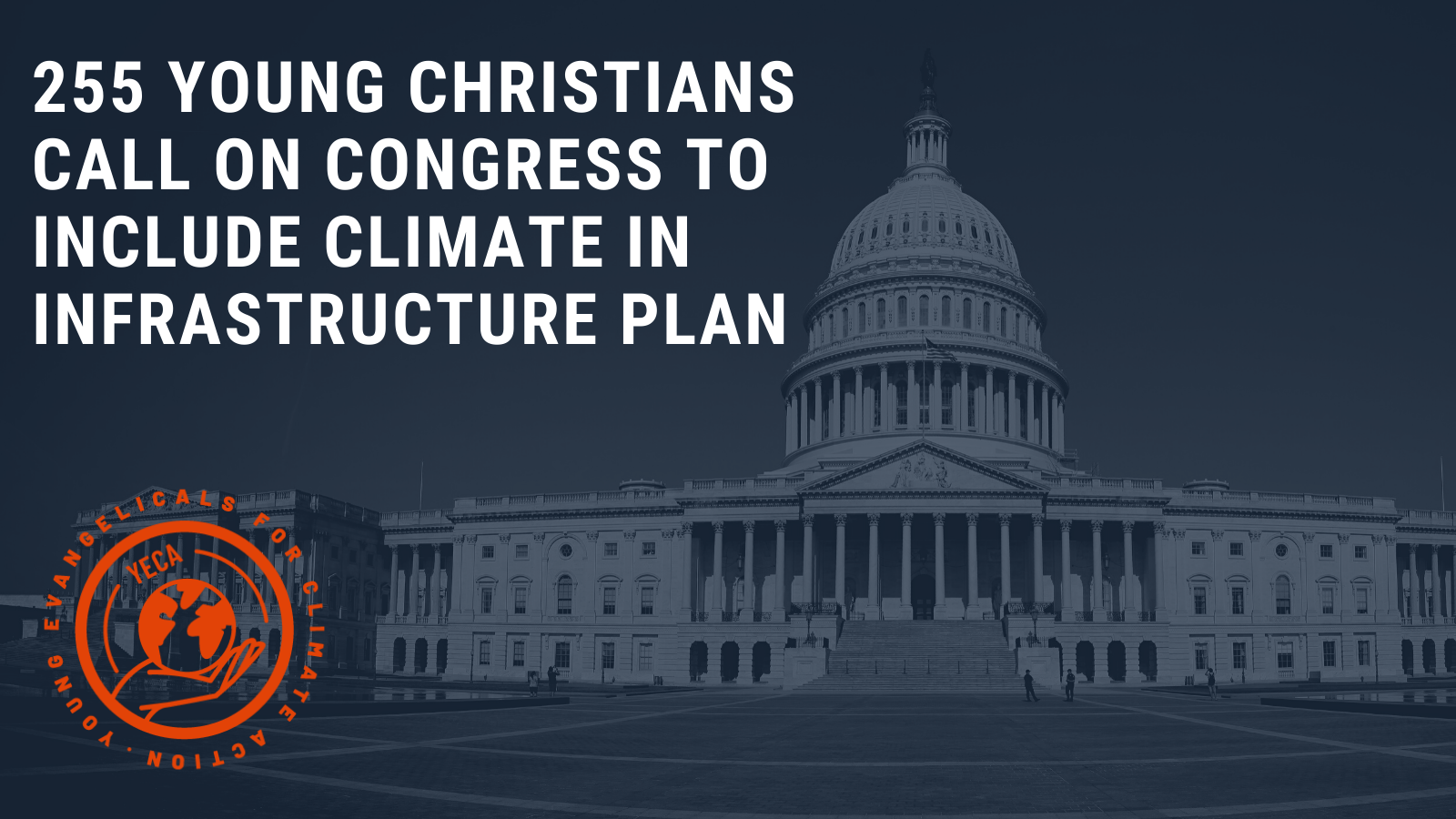 The following letter signed by 255 young Christians was sent to Members of Congress today, calling on them to include bold climate and environmental provisions in a final infrastructure package.

As debate continues as to how best to kickstart the economic recovery from the COVID-19 crisis, you have an important opportunity to act boldly to create a better future. As young Christians, we urge you to rise to this historic moment and include good jobs, clean energy, and climate justice in a final infrastructure package.

Infrastructure is more than just roads and bridges. Events like the February Texas power outage remind us that the electrical infrastructure in the United States is woefully ill-equipped to handle the impacts of the climate crisis and is in desperate need of improvement. We call on you to seize the opportunity before you to improve climate resiliency, create good jobs, invest in clean energy, and address long-standing economic and racial injustice. You can achieve this by:

Any plan that excludes these commitments would be a significant failure of leadership with lasting consequences.

The climate crisis is already impacting communities in the United States and will continue to worsen if you do not act. On May 27, the World Meteorological Organization announced that “there is about a 40% chance of the annual average global temperature temporarily reaching 1.5°C above the pre-industrial level in at least one of the next five years – and these odds are increasing with time.” This is a significant concern for young Christians because we are called to love our neighbors (Matt. 22:34-40), to care for creation (Gen. 2:15), and to seek justice (Micah 6:8). As leaders in Congress, you must act with the boldness and urgency that this moment requires. We are barreling toward a catastrophic tipping point and history will remember how you acted, or failed to act, when you saw the rapidly closing window of opportunity.

Young people–your constituents–have been steadily marching, raising awareness, and demanding action. This engagement was on display in the 2020 general election, which had one of the highest youth turnout rates in recent history. According to Tufts University, half of Americans ages 18-29 voted in November.

As young people, we often hear that we are “inspiring” and “the leaders of tomorrow.” To this we say: do not be merely inspired by us. Listen to us, and act accordingly.

As you craft infrastructure plans, we implore you to act for the sake of your neighbors and God’s world.

It is time for climate justice. Young people are watching and we will not accept anything less.

Send your own message today!