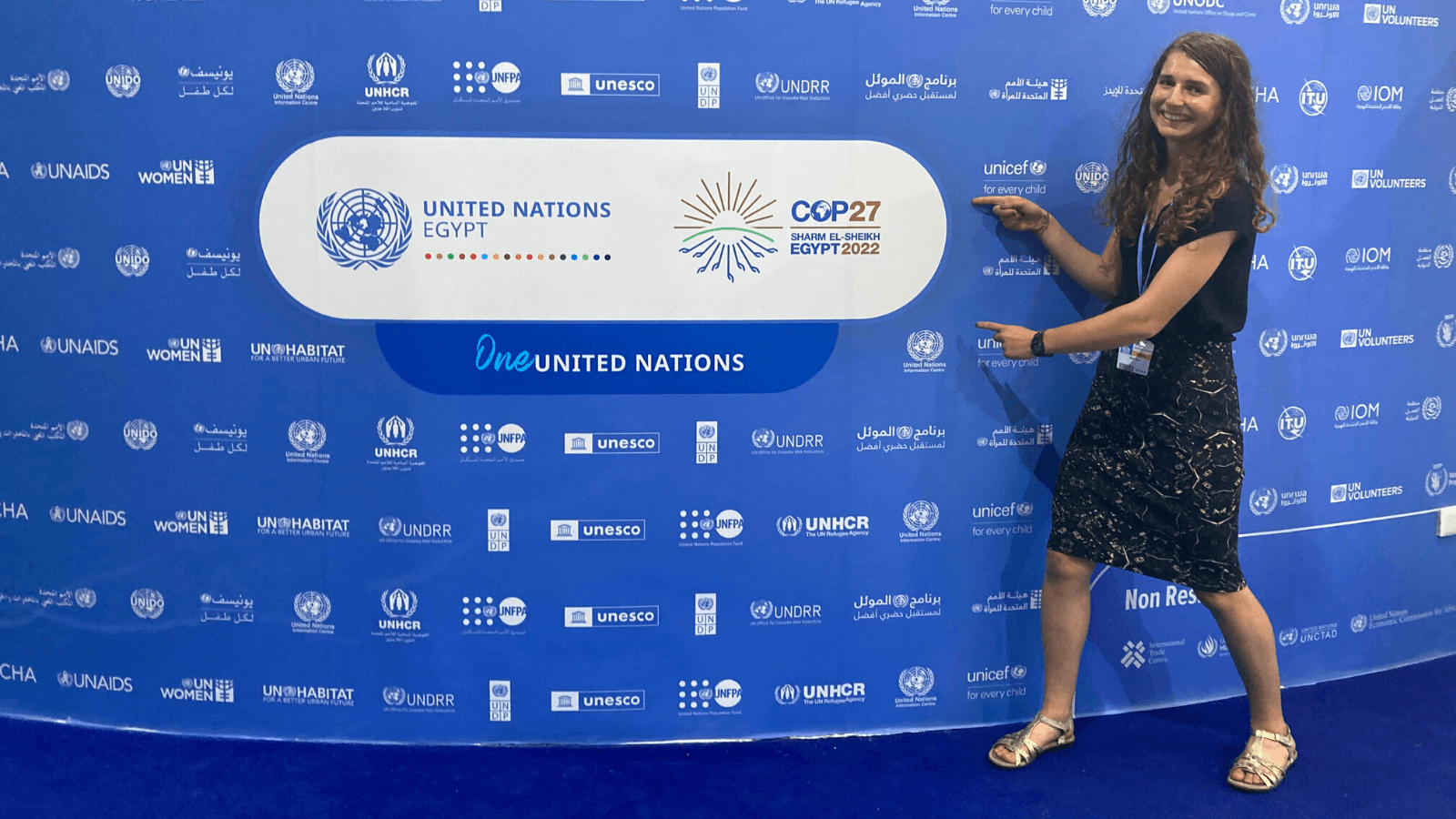 This Advent, as I’ve been reading Isaiah, I’ve noticed nature imagery that tells of a thriving, healthy, hopeful world.

“The desert and the parched land will be glad; the wilderness will rejoice and blossom. Like the crocus, it will burst into bloom; it will rejoice greatly and shout for joy.” (Isaiah 35:1).

As I read, my mind immediately spirals down to thoughts of a future world with climate change, and feelings of despair sit in the pit of my stomach. Memories stir in my mind, including my skis slicing through puddles during my time as a ski instructor on the east coast, the charred toothpick trees from the remnants of the Pipeline fire that the Arizona trail trickles through, and weird weather patterns affecting the blueberry farm I worked for in Michigan.

These don’t resemble the images of hope and justice I’m familiar with in the Bible.

As I landed in Egypt on November 6 to attend the United Nations Climate Change Conference (COP27) with the Christian Climate Observers Program (CCOP), this feeling of anxiety was at the forefront of my mind. I wondered what I would discover: flashes of doom or the hope of a better world to come.

Throughout the many pavilions at the conference venue, I followed some of the other CCOP group members. For my first event, we ended up at the US Pavilion, where they were having a panel on nature-based solutions.

“We need to conserve forests.”

“We need to listen to indigenous knowledge.”

Feelings of frustration grinded in my clenched teeth. Of course we need to do those things, I thought. But, how are we going to do them?

Walking away from that first talk made me feel like I wasn’t going to find many glimmers of hope at COP27. However, the brightly colored and crowded children and youth pavilion radiated an energy that immediately grabbed my attention.

A friend and I ended up striking up a conversation at the pavilion with someone named Musa. He was a researcher from Nigeria. Africa is suffering many impacts of climate change, including whole towns flooding, severe storms, and desertification, even though they contribute to only 4% of global emissions. Musa researched erosion control, invasive species control, and climate change adaptation.

Musa asked me questions about my wildfire restoration research - were these large fires on the west coast normal? What could be done to restore these landscapes?

After we exchanged business cards, I left this conversation feeling like the weight of despair had melted off my shoulders. Even though Musa and I lived on opposite sides of the world, we had a connection because we were both passionate about our research relating to restoring ecosystems affected by climate change.

From that moment on, I decided to make it a goal to hear as many people’s stories as I could.

I met Rahmina Paulette, a young climate activist from Kenya, who started a business employing women to make art and home goods out of water hyacinth, an invasive reed in Lake Victoria.

I learned about an organization called “Letters to the Earth,” in which anyone can give their own unique perspective and use it as a voice in climate activism.

I had an inspiring conversation with Xiye Bastida, another young climate activist, about effective science communication and creating a climate movement.

I heard stories from the other members of the CCOP program. Rebecca’s cousin, Elijah, had passed away in a flood in Uganda and now she was here to fight for loss and damage. David was also a writer like me, and he offered encouragement and advice for combining artistic methods and climate themes. And I had many conversations with other college students - Julianna, Isaac, Angelea, and many more - about our role in the climate movement.

As I gave final goodbye hugs to the other CCOP-ers outside the hotel, I realized when I’d felt despair, I had underestimated God’s people. In this one short week, I had met people from all over the world who were passionate about working towards climate solutions.

I think when God gave us the gift of these hopeful images in the Bible, He was also giving us an invitation to create this world in partnership with Him. And I think I learned from COP27 that we don’t have to do it alone - there are so many diverse people across the world that are working on the same effort. Together, our strong voices can create a movement to hold the world leaders accountable for creating this world of hope that God envisioned for the earth.